6 Animals That Were Enemies To The Megalodon (Scary and Lethal)

How Did Whales Became the Biggest Animal of All Time (AND WHY?)

A Rare And Extremely Bright Golden Turtle Was Found in India

Aquarium Installs Sushi Roll Cylinders For Eels To Slide Into

Man Jumped Into A Frozen Lake To Save Drowning Dog (VIDEO)

Watch how this Expert diver gracefully dances with tiger sharks.

Moray Eel coming to you! How would you react?

A drone catches a whale blowing into the air: That sound. That damn sound!

Caught on Camera: An Osprey flies high after grabbing a shark from the sea

They found the same whale after 35 years in Mexico (PHOTOS)

Mother and baby Whales swimming together with a hidden message (VIDEO)

A goldfish is probably the last thing you think may need a life jacket, but as it turns out, this little goldfish’s life has turned around — literally.

This poor goldfish was stuck swimming upside down after it developed a buoyancy disorder AKA swim bladder. Thankfully though, the life jacket was just what was needed to save the fish from spending the rest of its life upside down

The unfortunate goldie found himself constantly living upside down and at the bottom of his tank after contracting the untreatable illness. 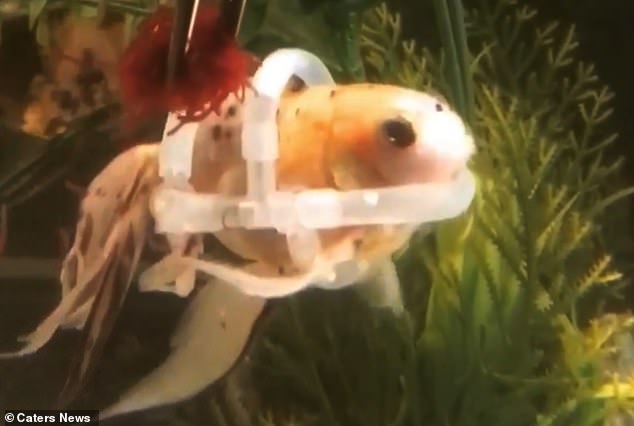 The unfortunate fish found himself living upside at the bottom of his tank after a bout of the swim bladder, a disorder that affects buoyancy

Unprepared to see him suffer his family sought help from a nearby animal sanctuary.

Stacey O’Shea, founder of The Garden Sanctuary from Wolverhampton, UK, used her animal expertise to craft a special lifejacket.

See the goldfish lifejacket in action:

Related Topics:365wildlifefishsea life
Up Next

How Did Whales Became the Biggest Animal of All Time (AND WHY?)